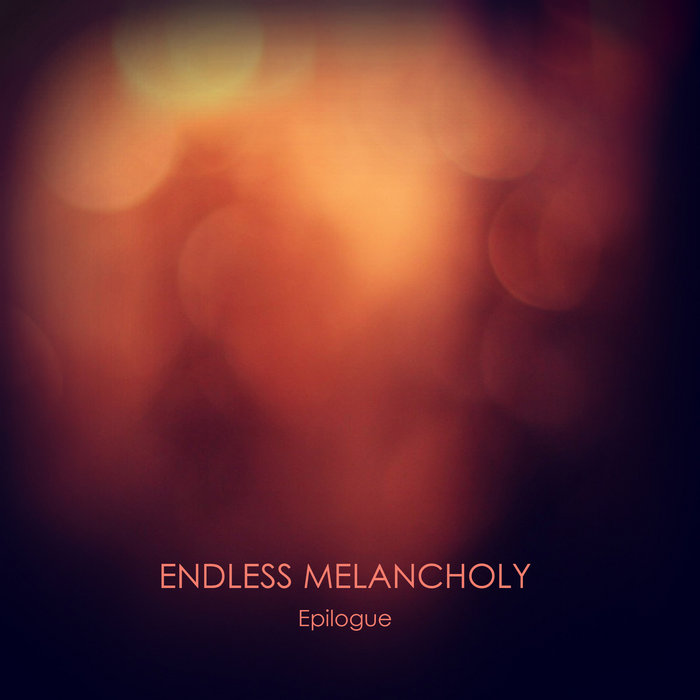 Tim McLelland Excellent album to chill on the back deck with Favorite track: We Have Met Before.

jazzbedamned No words can describe how this album makes me feel. Flawless from the first note till the very last. Favorite track: We Have Met Before.

Khaled Bamujally This album makes you feel suspended in light. Favorite track: As The Sun Quietly Sets And The Seashore Slowly Falls Asleep.

"Epilogue" is a second full-length album by Endless Melancholy. Recorded during 2012-2013 it was released on Hidden Vibes as limited edition CDr on 2 July, 2013.

Epilogue‘s opening track continues the collaboration. Linear Bells, EUS and Creation VI also grace single tracks, lending them additional vitality. Sakevych has learned the value of a fuller sound; as beautiful as his piano may be, it works even better when presented both alone and adorned. We loved the solo Five Songs EP, and two of the tracks appear here in slightly abbreviated versions: the EP’s opener and closer, “We Have Met Before” and “Nostalgia”. ”We Have Met Before” now boasts strings in the final minute, which completely changes its trajectory and mood. Both versions are indispensable.

“As the Sun Quietly Sets and the Seashore Falls Asleep” is the most ambitious piece that Sakevych has ever tried, and the title betrays its post-rock ambitions. Bass and drums add depth, and by the ivory switch at 4:27, it sounds more like the work of a band with piano than that of a solo artist. The descent begins only a minute later, but continues until the 8th minute, brave and unexpected. It’s the best track on here, and this experimentation increases our respect for the performer. The guest stars are great (and we suggested such a thing a couple reviews back), but the top story is that Sakevych is stretching his own boundaries as well; to date, all of his decisions have been wise.

The sixth release by Kiev-based composer Endless Melancholy aka Oleksiy Sakevych features nine soothing minimal piano tracks, which perfectly reflect the artists love for ambient music and soulful piano compositions. Every track is not just a piece of music, but a journey through silent soundscapes and thoughtful moments, where the sound of the keys merges softly with subtle ambient noises, water ripples, the gentle rustle of leaves and distant synth pads. But Sakevych cannot be reduced to the neo-classical genre. Experiments with post-rock or dream-pop elements spice up the album and makes it more versatile than its predecessor. The track As The Sun Quietly Sets And The Seashore Slowly Falls Asleep is his most ambitious piece and also the best example for his cross-frontier attempts. Guest appearances by Lights Dim, Linear Bells and Creation VI add another very intriguing dimension to the album without leaving the predominant theme of the oevre.
Moreover you can order a limited CD-R edition (100 copies), which comes in a handmade paper sleeve with a booklet and 3 printed cards inside. It’s a wonderful side-effect of self-published music: you get unique items, made by the artist and, maybe, several years later, you’ll find them in your record shelf and remember the time when the music industry lost all it’s power.

Endless Melancholy seems a perfect name for this project, because it’s straightforward and heartfelt. It’s amazing to find an artist who can show more with less. Sounds obvious, but some artists really add too many instruments and the whole point of the song is lost in the disaster (sometimes that’s the point, but nevermind…). And to be honest, Sakevych does the job masterfully.
Ambient music isn’t much of a party starter, so don’t try to use it around too many people, unless you’re not looking to chat with your family or friends. Feels like this is a record made to be heard on your own and in the comfort of your room or wherever you feel safe.

musicwontsaveyou.com/2013/07/21/endless-melancholy-epilogue by Music Won't Save You;

Mastered by Wiktor Korczakowski.
Thanks to Marek Kaminski, David Teboul, Jose Acuña, Tim Six for taking part in recordings and for all the other help with an album.