Deep As The Dark Blue Sea 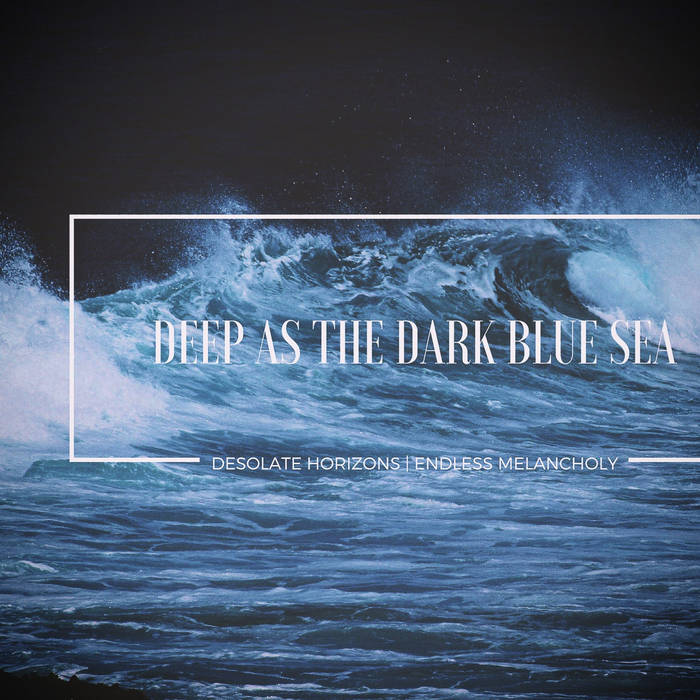 In.Visible.Generator Intense and poetic! Perfect build up´s to huge soundexplosions. Favorite track: The Air Here Is Written With You.

'...it is then that I look up and I see — I — see it: the sea. For the first time, after days and days, I really see it. And I hear its immense voice and powerful smell and, inside, its unstoppable dance, an infinite wave. Everything disappears and nothing remains but the sea, before me, upon me. A revelation. The pall of anguish and fear that has gripped my soul fades away, the web of infamy, cruelty, and horror that has ravished my eyes falls apart, the shadow of death that has devoured my mind dissolves, and in the sudden light of an unexpected clarity I finally see, and hear, and understand. The sea. It had seemed a spectator, even silent, even an accomplice. It had seemed a frame, a stage set, a backdrop. Now I look at it and I see: the sea was everything. It was everything, right from the first moment. I see it dancing around me, sumptuous in an icy light, a marvelous, infinite world. The sea was in the hands that killed, in the dead who were dying, the sea was in the hunger and thirst, the sea was in the torment, in the baseness and the madness, the sea was the hatred and the desperation, mercy and sacrifice, the sea is this blood and this meat, the sea is this horror and this splendor. There is no raft, there are no men, there are no words, feelings, gestures, nothing. There are no guilty and no innocent, condemned and saved.
There is only the sea. All things have become the sea.'

Although they might come from opposite ends of the ambient spectrum, both Endless Melancholy and Desolate Horizons both possess a common and unshakable vision for their music. Though differing in form, both artists have come together for the first time, creating a split album that is quite literally as ‘Deep As the Dark Blue Sea’.

Endless Melancholy is a constant innovator who holds his influences firmly in ambient and modern classical music, while Desolate horizons has its roots founded in the world of drone and shoegaze, and yet together they have managed to cultivate an album that holds dear the sea, the love, and the dream.

Led by an epigraph that has been plucked delicately from Alessandro Baricco’s novel ‘Ocean Sea’, ‘Deep As The Dark Blue Sea’ contains five tracks from each artist, forming two distinct musical journeys that lead to a single, expansive destination.

Opening with Endless Melancholy’s contribution, ‘Deep As The Dark Blue Sea’ arrives with waves lapping over darkened shores, accompanied only by a growing band of classical sounds and melodic flourishes. It’s a slowly building approach to the album and its themes, one that grows stronger and more pronounced with each of Endless Melancholy’s songs, encapsulating the wonder and dark power of the sea perfectly in ‘A Giant Wave’, while also dedicating time and sound to the more delicate, beautiful, and expansive elements of the sea in ‘Reflections’.

Desolate Horizon’s contribution is far more elemental based, working with drawn out sounds and ambient textures to showcase the unfolding drama and steady heart of the sea. His works all grows subtly from a haze of static, drawing themselves into existence through hints of a harmony or a microsecond of melody. They’re flowing, heavily organic pieces that conjure visceral dreams of a sun-soaked ocean lapping against your skin, drawing romantic notions to spark in ‘Your Echoes Drift Through Me Likes Waves Caressing the Shores’, and wondrous possibilities to blossom in ‘Like whispers Lost at Sea, We Soar’.

In the end, there’s little more to do than marvel at the quality of ‘Deep As The Dark Blue Sea’, with two brilliant talents combining to forge a singular vision. Each half of the release comes with a wondrous sense of individuality with both artists applying their sounds brilliantly, but the overall cohesion between the two makes it an almost seamless triumph.

The sea. That unending expanse of water which your eyes follow to the horizon. Standing on a South Kent clifftop on a misty morning at dawn, or gazing out across a lemon yellow sparkling estuary in North Lancashire at dusk; there it is, the water lapping at your feet, the sound of crashing waves and the smell of seaweed drawing you in like no other feature of the landscape. In Britain, anyway, where we have thousands of miles of coastline calling us. Most of it hasn’t even been privatised, yet.

Ukraine’s Endless Melancholy and Desolate Horizons certainly love the sea and it has inspired them to create an ocean themed album as drifting and alluring as the Atlantic or Baltic. There is so much warmth emanating from these sounds. Oleksiy Sakevych’s Endless Melancholy project soundtracks the first half of this wonderful disc, his ethereal sounds drenched with heart-achingly yearning synth chords, tranquil electric piano and questing post-rock electric guitar. Ocean sounds naturally permeate, lapping waves opening the record. Those misty banks of synth give way to clearing, clarion moments of sad piano and supportive rhodes. The overall effect is magically entrancing and affecting.

I’ve had more than a few stressful moments in the last couple of weeks. Nothing too serious, mind you, mostly work related arguments, pointless conversations and imaginary nonsense – things that I’ll find to be silly in just a few months, or not worthy enough to even remember. But during those bouts of stress (and even occasional anger) everything I feel seems to be very real, and the mental transcends into physical, causing discomfort, malaise and pain. Knowing how to acknowledge and embrace that emotion is just the first step in letting it all subside. Sometimes you need other tools to remind or distract you. Music, of course, is a great way to counteract (or amplify) a particular feeling. And in these last few weeks, I’ve turned to music to refocus my state.


The sounds of the Deep As The Dark Blue Sea come on exactly the way that I need them. Slow washes of distant white noise, sounds of water and the crashing waves, long stretches of soaring guitar drone… The harmonic texture of these endless pads is mostly in major chord, smoothing out the rough edges of agitation with calmness, elation and joy. Notes of euphoria lift up the spirit with the ebb and flow of the sound, carrying forward the boundless cycle of life. Soon, everything blends into one sonic surface, seeping into the deep crevices of my flustered mind to bring it to comfort, content and peace. Everything will pass… Everything will pass – even this… even this…

Everything disappears and nothing remains but the sea, before me, upon me. A revelation. The pall of anguish and fear that has gripped my soul fades away, the web of infamy, cruelty, and horror that has ravished my eyes falls apart, the shadow of death that has devoured my mind dissolves, and in the sudden light of an unexpected clarity I finally see, and hear, and understand…” -Alessandro Baricco, ‘Ocean Sea’
At first, this album appears to be a collaboration between two artists separated by distance, Desolate Horizons and Endless Melancholy (their names, already, suggesting more than just a feeling transmitted within). But the release is actually a split, with five pieces from each project. Endless Melancholy is Oleksiy Sakevych, hailing from Kiev, Ukraine, previously appearing on these pages via Reader’s Poll for best of 2015 music, with Her Name In A Language Of Stars, released on Hidden Vibes. Sakevych’s ambient drones first appeared on Preserved Sound back in 2012, and he has recently released a digital album, A Quiet Recollection, on 1631 Recordings. Desolate Horizons, on the other hand, is an anonymous artist from Russia, Kazan, also appearing on Hidden Vibes with his debut, We’ll Never Fade Away back in 2015. This anonymity is admirable, but makes it a bit difficult for me to tell you a bit more about the project. Both artists draw inspiration from the above quote by Baricco to construct an album full of ambient textures, shoegaze and drone.

Perhaps I should be thinking of the sea during my introspective moments with music as the aid, meditating on its vast and tranquil essence, washing away all of which is brief. “There is no raft, there are no men, there are no words, feelings, gestures, nothing. There are no guilty and no innocent, condemned and saved. There is only the sea. All things have become the sea.” And whether those images, evoked by the sound of the waves, finally come to cradle my mind into submission, the result is the same. I am finally present. I am finally here. Thank you…